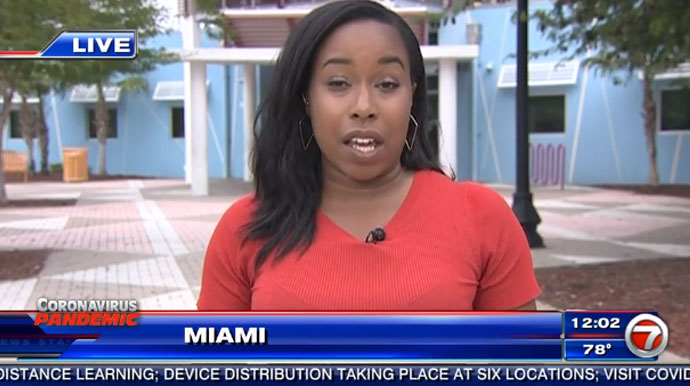 MIAMI (WSVN) – During the continuous spread of the novel coronavirus in South Florida, more families are finding it difficult to put food on their tables.

Several organizations are offering support with food drives and distributions throughout Miami-Dade and Broward counties.

Organizers said they were almost caught off guard by the number of people that showed up.

“There’s nothing for us out here,” said recipient Donna Adams.

Adams said she nor her husband will leave their home for anything that is not absolutely necessary.

“Trying to go out and get food and get to the various supermarkets and things — not an option for us,” she said.

The effort was organized by DeliverLean and Alonzo Mourning’s Overtown Youth Center.

Organizers and volunteers handed out hot meals to the dozens of cars that lined up at the venue.

“We want everybody to be safe at this time, but we don’t want anyone to go hungry,” said Overtown Youth Center’s CEO Tina Brown.

“We know that this economy, we haven’t even seen the worst of it,” said Miami Heat legend Alonzo Mourning.

Meals were given to those who are vulnerable to the virus and others who had not had a meal in days.

The organizers have been handing out more than 600 meals a week to those in need.

“I’ve been blessed tremendously,” said Mourning. “The importance of a blessing is to use it to bless other people.”

“As families continue to come out, we will increase the number of meals that we serve to meet the needs of this community and members of other communities,” said Brown.

Organizers said the distribution of meals will not stop until the pandemic is over.

“We are here, and we are in need,” said one recipient.

The Broward Sheriff’s Office recently conducted their own efforts, Operation Helping Hand, where they personally delivered bags of food to families in Pompano Beach that are struggling during the pandemic.

BSO teamed up with Feeding South Florida and took to the streets to help their community’s most vulnerable residents.

“It was unexpected,” said one recipient. “I more than appreciate it, you know, based on the times we’re in, because we got laid off from our jobs.”

Another food distribution site was Opa-Locka where more than 1,000 bags were given to people in need.

The food distribution at Gibson Park will be held every Monday, Wednesday and Friday until further notice.